Posted on December 6, 2013 by stonekingseminars 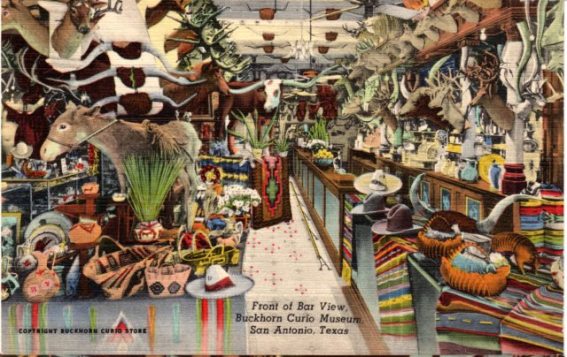 Way back in 1881, a man named Albert Friedrich opened Albert’s Buckhorn Saloon on Delorosa Street in downtown San Antonio, Texas, an enterprising entrepenaur, Friedrich opened the saloon with the offer: “Bring in your deer antlers and you can trade them for a shot of whiskey or beer.” And so the world’s most unique collection of horns and antlers began. Albert’s father, Wenzel, soon joined in on the act, making handmade horn furniture for the saloon. In no time at all, cowboys and hunters began to bring in horns and trophy mounts from all kinds of animals.

Some ten years later Albert married a gal by the name of Emilie Derr and the two came up with the idea to expand the offer to include rattlesnake rattlers, which Emilie fashioned signs and artwork from. For a free drink, this too, was a huge success.By 1896, the saloon was so popular that it needed bigger quarters and moved to Houston and Soledad Streets. Just two years later, the most popular saloon in San Antonio.

A coupla’ years later, the saloon acquired the world’s record whitetail “78 Point Buck” is acquired for $100 and put on display at the Buckhorn.

In 1922 the Buckhorn moved to even a larger space at the southwest corner of Houston Street and South Flores Street. Then Friedrich got himself a full size gorilla, which he placed in the front window for all to see. The most popular meeting spot in town soon stopped with the advent of Prohibition. But, in 1932, Prohibition was repealed, and in no time the Buckhorn reopened providing vaudeville entertainers.

In 1956, the Lone Star Brewing Company purchased the world-famous Buckhorn Collection and opened the Lone Star Buckhorn Hall of Horns. After the World’s Fair, Hemisphere, was held in San Antonio in 1968, the Hall of Texas History Wax Museum relocated to the site of the Buckhorn Hall of Horns. Almost twenty years later, in 1973, the Hall of Feathers and Hall of Fins were opened.

In 1998, the Lone Star Brewery closed and the new owner, Stroh’s Beer, moved the brewing of Lone Star to the Stroh’s Brewery in Longview, Texas. However, in order to keep The Buckhorn collection in San Antonio, the granddaughter of Albert Friedrich, Mary Friedrich Rogers and her husband, Wallace Rogers, acquired the collection.  On December 22, 1998, the new Buckhorn Saloon & Museum opened on Houston Street – a few blocks from the original 1881 location. 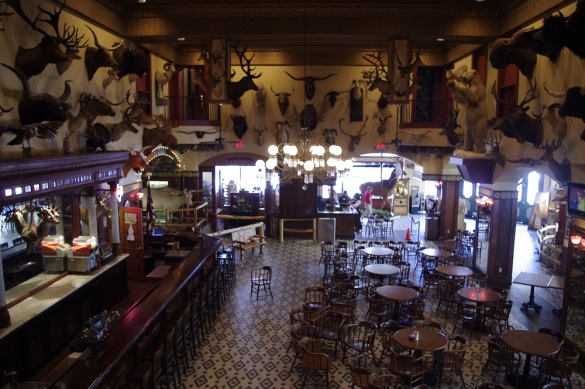 This massive assemblage of Texas- style stuff also includes a dead baby giraffe, a bottle cap collection, and portraits made from rattlesnake rattlers and a large Indian chief silhouette “drawn” in sheet metal with a .22 caliber rifle.

The Buckhorn Saloon also features the Ranger Museum which exhibits revolvers, automatic handguns, sawed off shotguns, badges, photographs, and more. But, its major exhibit is “Ranger Town,” a recreation of San Antonio at the turn of the century. Explore this western town complete with a saloon, jail, blacksmith shop and telegraph office. The Bonnie and Clyde exhibit complete with a ‘34 Ford V8 Deluxe is a guest favorite.

The Buckhorn Saloon and Museum is just a short two block walk from the Alamo and only 50 feet from the River Walk at the corner of Houston Street and North Presa Street. 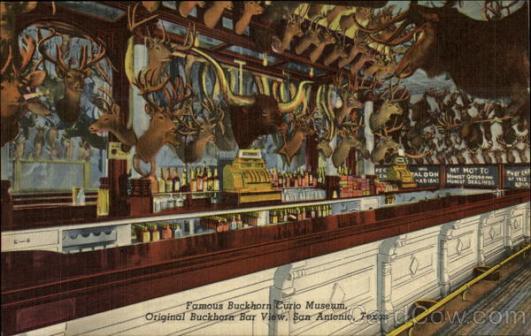 Poet, screenwriter, producer, mentor
View all posts by stonekingseminars →
This entry was posted in Memories, Miscellaneous. Bookmark the permalink.